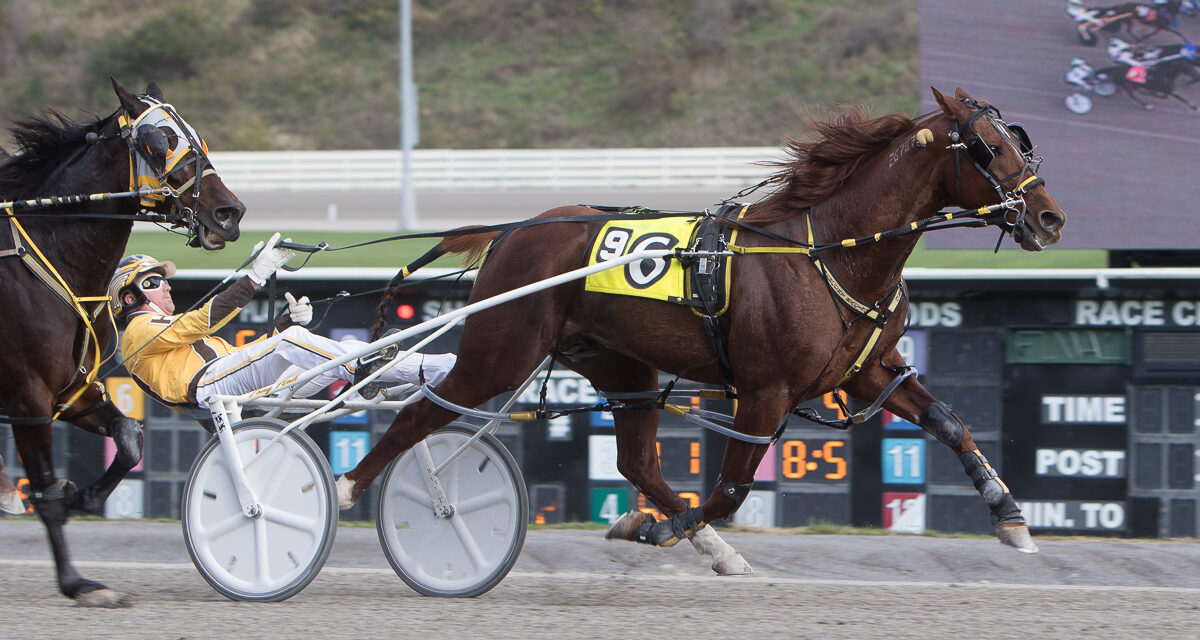 He’s banked nearly $1.4 million, and he could out-tough almost every opponent he ever faced. But that old warhorse Father Time proved even more persistent, so after his start Friday at The Meadows, 11-year-old Dapper Dude will retire from racing and launch the next phase of his glorious career at stud.

Dapper Dude leaves from post 2, race 6, with his favorite driver, Aaron Merriman, in the sulky.

In his recent starts, the son of The Panderosa-Dressed To Suggest has looked nothing like his old self, drifting through the class ranks and bottoming out in low-end conditioned races. His trainer, Tim Twaddle, said it’s painfully clear to him that retirement is Dapper Dude’s best option.

“He still tries hard but doesn’t have it like he should,” Twaddle confirmed. “I don’t want to prolong the obvious.”

He indicated that Dapper Dude would stand at Harris Paint Horses & Stallion Station in Federalsburg, MD and that David Cohen’s Micki Rae Stables would continue to own him.

Hall of Famer Bob McIntosh and his cousin, Al McIntosh, bred Dapper Dude and campaigned him during his freshman and sophomore seasons. They knew early on they had something special.

“He comes from a great family, and you couldn’t draw a better-looking horse,” Bob McIntosh said. “He was tough as an army boot, and he wore well.”

At 3, the handsome chestnut finished third in the North America Cup final, and he bested the redoubtable Sweet Lou in the Pennsylvania Sires Stakes championship.

Dapper Dude subsequently was sold several times; for each new owner, he showed that same speed and grit — despite multiple throat surgeries. In many of his races at The Meadows, he looked so weary into the final turn that it appeared only an oxygen tank could get him home. But when a rival looked him the eye, he found more and usually prevailed. To Merriman, that determination is what marks him as a champion.

“He exudes such class,” Merriman said. “I don’t know how many times he seemed defeated yet came back in the stretch to win or improve his position. He knew where the money was. When you consider that he suffered with breathing problems his whole life, it’s amazing that he accomplished what he did.”

Dapper Dude’s exuberance is as noteworthy as his toughness. Bill Bercury, who trained him for Renee Bercury for most of his time at The Meadows, notes that the horse is “loaded with personality.”

“When you took him off the trailer,” Bercury says, “he would start bellowing, letting everybody know he was there, as if to say, ‘I am here. I am ready. Watch out.’ Then he’d strut into the ship-in barn.”

Harris Paint Horses & Stallion Station has a short list of Standardbred stallions, so Dapper Dude has a chance to make an immediate impact. Twaddle said he plans to acquire some broodmares to send to Dapper Dude to get him off to a good start.

“I was looking at his win pictures the other night, and every single one of them was by a head, a nose, a neck,” Twaddle said. “He never ran off, just did whatever was necessary to beat them down. If he can pass along that trait, he’ll make a lot of people happy.”