Jockey Chantal Sutherland-Kruse to attempt record at The Meadows 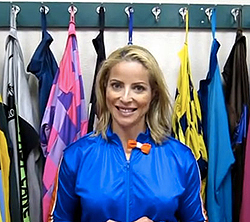 The current record of 1:59.1 under saddle on a five-eighths-mile track was set by Karen Isbell riding Fort Valley As on June 29, 2013 at Pocono Downs.

“I’m looking forward to riding a trotter in my ‘pink saddle,’ which has taken me from Canada to the States, Hong Kong, Dubai, then England, and now The Meadows Racetrack in an attempt to break a world record,” said Sutherland-Kruse. “This is an exciting time for me to experience the Standardbred equine after having been in the Thoroughbred world for so long.

“It will be a joy to get back to my roots, to the good old days when my dad would take me to the Standardbred farms and tracks all over Canada,” said the jockey who is currently riding at Del Mar in California. “I used to jog horses sitting in the cart with him and also dangle my feet off the back of a pickup truck with a lead shank attached to a couple of young horses to drive them around our track to get them fit.”

Sutherland-Kruse, a native of Winnipeg, Manitoba, rose to fame as a jockey, actress and model. Her list of accomplishments both on and off the track are extensive, and she will look to add to her resume when she attempts to break the record for a mile on a five-eighths-mile track with a Standardbred under saddle.

Starting her riding career in Canada, Sutherland-Kruse captured the 2001 and 2002 Sovereign Award as that country’s leading apprentice jockey. She was second leading rider at Woodbine in both 2008 and 2009, and third in 2010.

In 2011, she shifted her tack to Southern California where she made history as the only female jockey ever to win the Santa Anita Handicap aboard Game On Dude. A year later, she also captured the Hollywood Gold Cup with that mount. Sutherland, who has 932 career wins and more than $47 million in lifetime earnings, recently returned to riding after a brief retirement in October 2012.

Off the track, she has appeared in People, Vogue, Vanity Fair and Sports Illustrated magazines as well as two TV series, “Jockeys” on Animal Planet and “Luck” on HBO.

For the mile, Sutherland-Kruse will team with The Meadows’ – and harness racing’s – leading trainer, Ron Burke. The Burke Stable will send Sutherland-Kruse to the track aboard DW’s NY Yank, a four-year-old accomplished trotter that was won 10 of 17 starts so far this season. The gelding’s fastest win time is 1:51.3, set on July 20 at Pocono Downs, also a five-eighths-mile track like The Meadows.

The event will follow traditional harness racing “time trial” standards, using a starting gate with two prompters that can stay behind or along side of Sutherland-Kruse’s mount.

The record attempt is sponsored by the Meadows Standardbred Owners Association.

“I’m grateful to the MSOA for giving me this opportunity,” said Sutherland-Kruse.

“We are excited about the opportunity that this gives us to bring such a highly recognized name from the sport of Thoroughbred racing to The Meadows,” said Heather Wilder, marketing representative for the MSOA. “With her beginnings nurtured in harness racing, and the success and notoriety that she has received throughout her accomplished career as a jockey, it just shows that we all share the common love of the animal and the enjoyment of competition.”

Ron Burke, whose stable has led harness racing in both wins and purse earnings every year since 2009, is prepping DW’s NY Yank, who is owned by Burke Racing Stable LLC, Howard Taylor and Weaver Bruscemi, LLC.

“This is a great opportunity for the two sports to meet, said Burke. “I love the opportunity to get a chance to see if we can do something special.”

The record attempt will come between races at the Meadows, which has a first post time of 12:55PM on Monday, September 23. The exact time as well as additional details will come in the next few weeks.