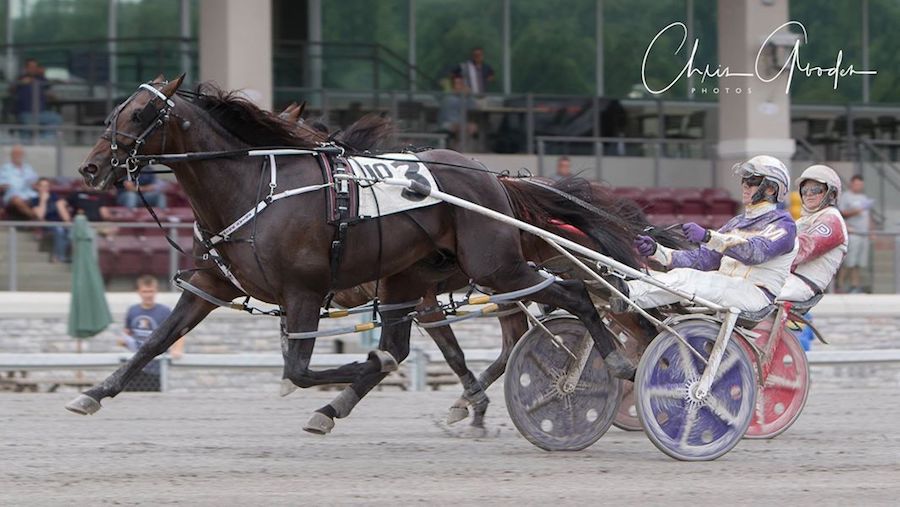 Huntsville and Fear The Dragon had to work much harder in the slop than overwhelming favorites would like, yet each was game enough Saturday to capture an elimination of the 51st edition of the Delvin Miller Adios Pace for the Orchids at The Meadows.
They’ll be joined in next Saturday’s $400,000 Adios final by Blood Line, Miso Fast, RJP, Western Hill, Eddard Hanover, Hurricane Beach and Highalator, who advanced as the fifth-place finisher with higher career earnings. The Adios final anchors a blockbuster card that begins at noon and features six Grand Circuit stakes.
Coming off a narrow victory in the Meadowlands Pace, Huntsville was parked for Tim Tetrick from post 7, finally reaching the top at the three-eighths. He still couldn’t relax, as he faced stern challenges from Highalator outside and the menacing Blood Line in the Lightning Lane. But the son of Somebeachsomewhere-Wild West Show was up to the task, holding off Blood Line by a neck in 1:49.3, with the rallying Miso Fast third.
“When you go a half in 53 on an off track, you’re always concerned,” Tetrick said. “It’s not really what I wanted to do. I thought I would get a spot in the first turn, but it closed up. But he got it done, and he’s going to the final. Hopefully it didn’t take too much out of him. I was trying to save as much as I could—that’s why I didn’t open it up. He was awesome. He got brutalized to the half, and he got the job done. The horse raced super.”
With the win, the Ray Schnittker trainee now has banked $1,316,665 for owners Ted Gewertz, Steven Arnold and Schnittker. Huntsville has finished first or second in all 19 of his career starts.
Fear The Dragon (photo), who last raced July 1 when he won the final of the Max Hempt, waited patiently in third before David Miller sent him after the leader, Hurricane Beach. Under unexpected urging from Miller, the son of Dragon Again-Armbro Cinnamon finally overtook Hurricane Beach in the lane and prevailed in 1:50.3, 1/2 length better than the closing Western Hill. Eddard Hanover was third.
While it was a successful, determined performance from a colt who has won eight of nine starts this year, winning trainer Brian Brown characterized it as “a little dull.”
“Normally, when David pulls him and pulls the plug, he’s really pacing forward,” Brown said. “But David was chasing, he was working to make him go. I hope he was just a little short and needed the race. I’ll check everything out—scope and pull blood and do all the normal stuff. I hope everything checks out; if not, we’ll fix whatever it is.”
Brown later reported that a post-race examination found an insignificant amount of mucous in the horse’s lungs. Emerald Highlands Farm campaigns Fear The Dragon, who extended his lifetime bankroll to $952,844.
The connections of Huntsville and Fear The Dragon won the right to select their post positions for the final—Brown indicated he would prefer post 3 or 4 but would leave the choice to Miller–with the other slots chosen by random draw. That draw is set for Tuesday, July 25, 12:30 PM, and will be available on Meadows Live! and at meadowsgaming.com. Trainer Ron Burke, who started six in the eliminations, saw three of his charges make it through: Miso Fast, RJP and Eddard Hanover.
– by Evan Pattak