The Meadows Standardbred Owners Association has announced that Heather Wilder has joined the association as public relations and marketing director.

The MSOA recognizes that horsemen’s associations need to promote attendance and handle at the racetrack, and has budgeted substantial funds toward this effort.

Wilder grew up in the sport of harness racing as the daughter of horsemen Dan and Ruth Altmeyer, and the niece of Ohio Hall of Famer Dave Rankin. She spent her summers as a child at The Meadows Racetrack and wintered in Oviedo, Fla., where her father conditioned his stable.

After graduating high school in 1997, she enrolled at Bethany College with a major in public relations. When an opportunity presented itself in the summer of 1999 at Scioto Downs, she worked as an intern in the publicity department and in the race office. Her duties included writing articles for various industry publications, while working in the press box at Scioto Downs and The Little Brown Jug.

She also worked as a customer service representative at the United States Trotting Association.

Wilder has been involved in all aspects of the industry and recently obtained her trainer and driver license. Her husband, Mike, is one of The Meadows’ leading drivers.
She begins this new appointment as public relations and marketing director of the MSOA with a sense of excitement and determination with the goal of improving the experience of current fans and exposing new people to this sport. 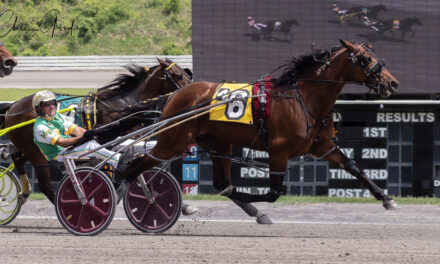