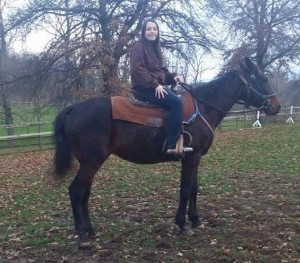 After a long journey, Coldheartedrevenge has returned to Western Pennsylvania with a new lease on life.

The gelding, now 14 years old, started his racing career in 2003.  He achieved quite a bit on the track, earning more than $847,000, some of which came at The Meadows several seasons ago.  He raced for many trainers over the years, but in 2012, at the age of 11, his racing career came to a close, more than 200 starts after it began.

Not much is known regarding his whereabouts for the past three years, but in late October he showed up at a horse placement agency in need of a home.  That’s when several Meadows-based people stepped in.

Missy Rothfuss, the track’s outrider, along with Julie Allison and Heather Wilder, rescued the retiree.  Rothfuss offered a home for the horse while Allison and Wilder offered to purchase the veteran from the placement agency.

“I hate seeing old class horses that gave their all end up without a home,” said Rothfuss.  “I’ve been helping older horses like him my whole life, mostly with riding horse breeds.  I like the challenge of retraining them and getting them a second chance.  Within the last year or two, I’ve started doing it with more Standardbreds, trying to promote life after racing for the breed.”

Rothfuss recently took part in the Equine Comeback Challenge with 11-year-old retired Standarbred Stormont O My, who she has since adopted.  Shortly after helping that retiree, Coldheartedrevenge came along in need of a home, and Rothfuss had room at her farm and in her life to take him in.  On October 21, Coldheartedrevenge arrived back in Washington, PA to begin his new life.

The horse was underweight and needed general care, and several people donated money to Rothfuss specifically for Coldheartedrevenge.  The pacer that had brought happiness to many horse owners over the years was now the recipient of an outpouring of support.  Several horsemen sent money and supplies.  Some came to visit the pacer they remembered, and an equine dentist offered his services for free.

Soon Rothfuss, her daughter Shaunna Morris, and family friend Autum Luellen began working with him as a riding horse, and quickly found that he was calm and laid back, very willing to learn.

As the days have passed, Coldheartedrevenge has been learning more and more, gaining weight and showing his personality.   His progress was noted on his own Facebook page, started by Rothfuss, and promoted by others within the harness racing world.

He then caught the eye of horse owner Steven Ream of Ohio, who is now in the process of adopting Coldheartedrevenge and giving him a forever home.

It is a happy ending to the story for Coldheartedrevenge, a classy veteran who deserved a second chance, and now has it. 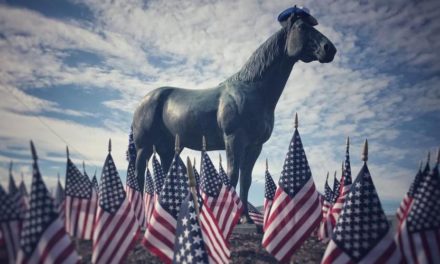 MSOA and The Meadows to salute military on Veterans Day

Meadows, MSOA host successful Back to the Track event