First freshmen take to the track for qualifying races

The Meadows Racetrack hosted its first qualifiers for two-year-olds over the weekend, with eight groups of freshmen prepping for the upcoming stake season.

Many of the horses that took to the track are headed to the Pennsylvania Fairs, which get underway on June 12 at Wattsburg, PA.

The opening qualifier of the day proved to be the fastest of the session, with Bob Key’s Dragon Strikes winning in 1:58.2. The colt, by Art Official out of the Dragon Again mare Dragon Flier K, won for trainer Rich Gillock and driver Tony Hall.

For video of Dragon Strikes’ victory and all of the other qualifiers in the session, CLICK HERE.

The fastest trotting mile was turned in by gelding Major Matter, a son of Explosive Matter-Tahiti Springs (Dream Vacation). Owner/trainer Rick Beinhauer was in the bike for the 2:01.3 win, with a final half of 1:00.

Underdog Hanover, owned by Virginia and Kathy Schoeffel and Jim Reuther, was a 2:02.1 winner for trainer/driver Steve Schoeffel. The Muscle Massive filly is out of the mare Up Front Pepe, by Andover Hall.

The top pacing filly of the morning was Unbeamlievable, a Moon Beam filly out of the mare DVC Iblievenangles (Life Sign). Driver Chris Shaw guided her to a come-from-behind win in 2:02.3 for owner Mason Shaw and trainer Jason Shaw.

Dozens more freshmen are expected to qualify this coming week. 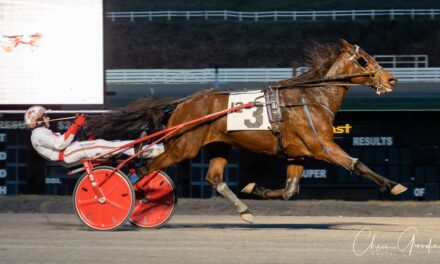 Sir Caviar named Horse of the Year by MSOA