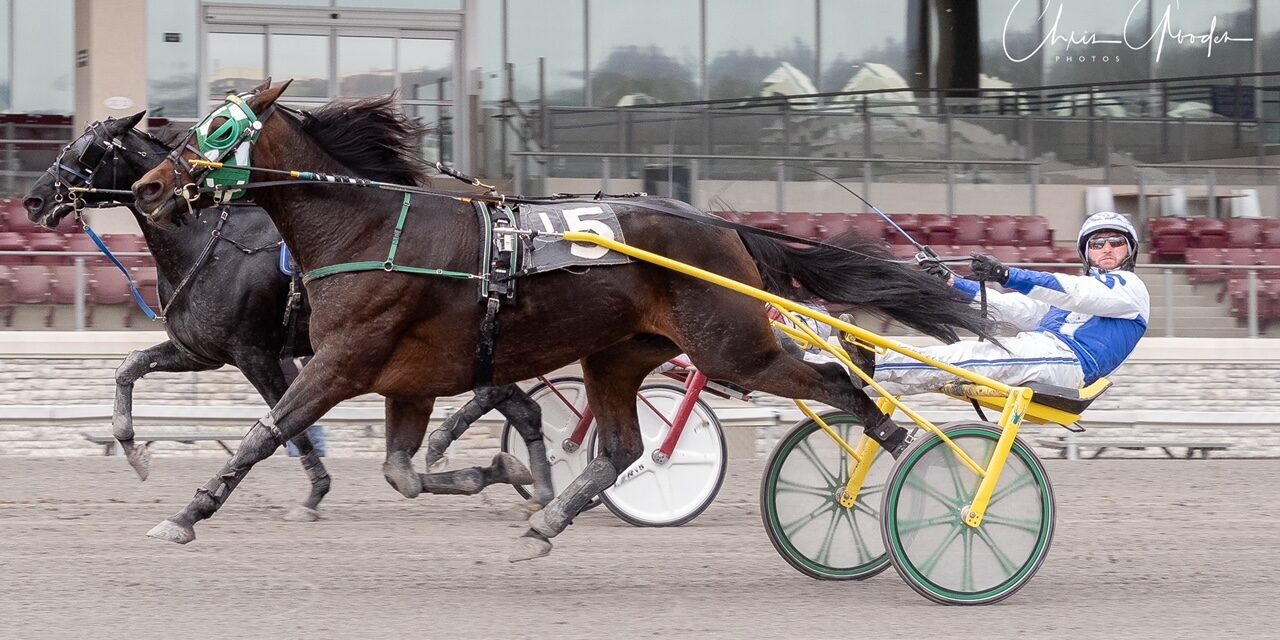 by Evan Pattak
Chris Shaw notched career win 1,000 at The Meadows when he piloted Pass The Vape to victory in Monday’s featured race, the $16,200 Open Handicap Trot.

Shaw, who got his first win at the York Fair in 2006, grew up in Lebanon, PA and was graduated from Lebanon High School, which also produced noted Standardbred owner Sam Bowie, who was known to play a little basketball in his day.

After high school, Shaw began working third shift at a Sherwin-Williams plant in Fredericksburg, PA — a grind to be sure, but it freed his mornings to help the horses trained by his brother Jason and their father.

“Jason always had 30 head, so there were a lot of opportunities to drive,” Chris recalls, “but when you race primarily at the fairs, you have to ship everywhere.”

When Jason relocated to southwestern Pennsylvania and year-round racing at The Meadows, Chris soon followed — as did their parents, Carol and Tom. Now, driving opportunities are even more abundant, as Chris’ wife, Ashley Brown, also is a trainer.

These days, Chris, whose mounts have won more than $7 million, is a fixture at both The Meadows and the Pennsylvania Fairs circuit. Does he have a preference?

“Racing’s racing no matter where you go,” he says. “Fairs are a little more family friendly, and that’s nice.”

As for the future, he indicates he has no immediate changes in mind.

And there’s little chance he’ll be returning to the corporate world — even if he didn’t have to work third shift.

“The adrenaline rush you get from driving, there’s no other feeling like it.”

In the milestone win, Shaw moved Pass The Vape first over from fourth. The duo overtook 1-5 favorite Lady’s Dude in mid-stretch and scored in 1:54 over a “good” surface. Milford’s Z Tam rallied from last for second, beaten a head, with Smalltownthrowdown third.

Derek Watiker trains Pass The Vape, a 5-year-old Dejarmbro-Vapor Rises gelding who pushed his career bankroll to $444,463, for Lionel Watiker.