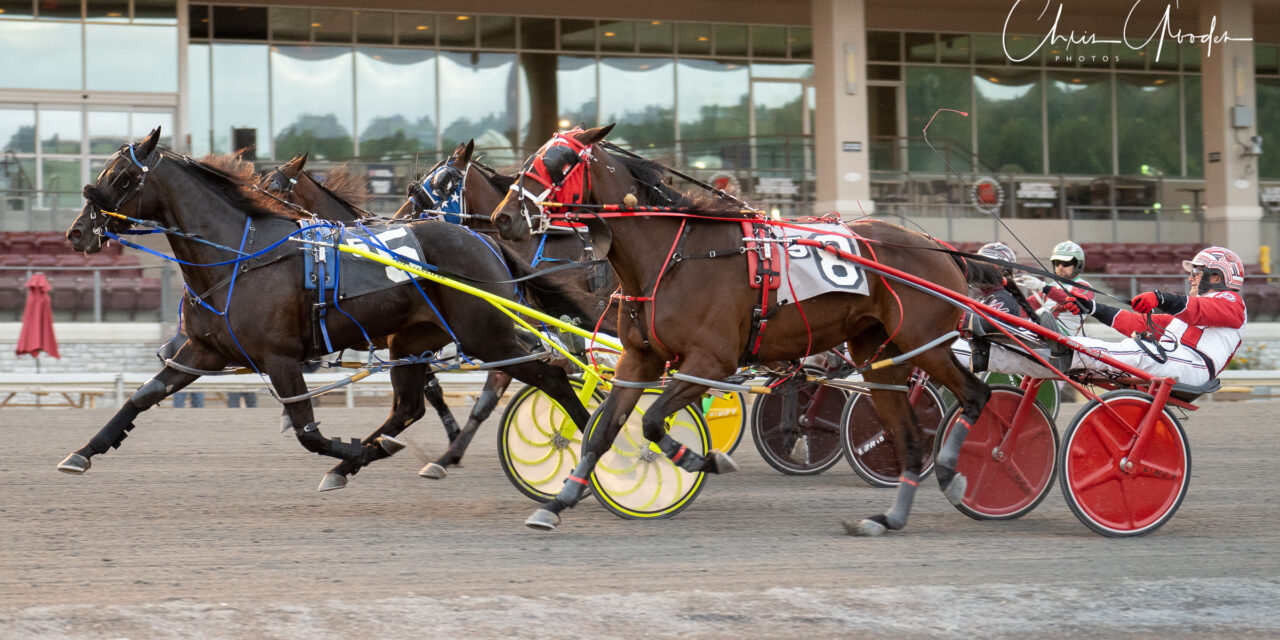 WASHINGTON, PA, Oct. 8, 2022 — Bettor Strait N Up needed a gritty stretch drive to do it, but she captured Friday’s $25,000 Pennsylvania Fairs championship for 3-year-old filly pacers at Hollywood Casino at The Meadows, completing her unprecedented PA Fairs “Double Double.” She became the first horse in fairs history to win both the points title and championship at 2 and 3.

The daughter of Betting Line-Strait N Great fronted the mile for Aaron Merriman but was challenged inside and outside late. She dug deep to down Jillian B Miki by 1/2 length in a career-best 1:54.2, with Gray Skies third in the Lightning Lane.

“I didn’t know if she could pull it off, but I’m so happy she did,” said winning trainer Linda Schadel, who owns the filly with Tony Schadel. “She might be for sale, or we might continue to race her. She might be a good Yonkers horse. It just depends on how the cards fall.”

The Meadows hosted all eight fairs finals, each with a $25,000 purse, and the event brought plenty of excitement and a few surprises. Seven of the eight winners either lowered or matched their lifetime marks. Mike Wilder collected three titles, including a pair for trainer Dan Altmeyer, while Todd Schadel enjoyed an owner/trainer/driver championship double. Merriman snared two titles while provisional driver Justin Wiest grabbed one to extend his family’s tradition at The Meadows.

Here are the highlights:

Wiest and Cherokee Joy trailed by 5 lengths at the three-quarters, but the daughter of Andover Hall-Cherokee Hope, who races for owner Bimmie Strausser, unleashed a ferosious kick to triumph in 1:58.3, a lifetime mark. Early leader Quarantina was 1-1/2 lengths back in second, with Shady Girl third.

“When all of our other colts were in 2:40, I had problems getting her to stay flat in 3:00,” Wiest said. “When she plunked down, she kept right on going. I know she can finish. I knew the guys would go out hell bent for leather, and I knew she would finish. I knew it was over when we hit the three-quarter pole.”

Wiest became the third generation of his family to win a stake at The Meadows. His father, David Wiest, trains Cherokee Joy while David’s dad, retired trainer and noted peafowl breeder Don Wiest, once held the track record with the 2-year-old filly trotter Eye Perfect.

Although Stay Happy was the second pick in the wagering, her victory ranks as one of the evening’s biggest surprises, as she had little trouble blowing by the 1-5 favorite, Little Lady J, from the pocket and defeating her by 2 lengths in a career-best 1:55. Wilder said her performance may have surprised bettors, but not him.

“Little Lady J is a really nice filly, but my filly is something special,” Wilder said. “I didn’t like having the 9 hole, but I thought if I could get away close to Little Lady J, I could give her a race. We’re done for this year.”

If Stay Happy’s win was the most unexpected, Buchannon Hanover’s was the least surprising, given that he was riding an 11-race winning streak. Yet he needed a Lightning Lane charge to hold off Ivy Stud by a length in a career-fastest 1:52.4. Early leader Honali was third.

“He doesn’t over-exert himself, that’s all I want to say,” indicated Todd Schadel, who owns the son of Always B Miki-Beachbunny Hanover with Christine Schadel. “I’ll probably take him to Yonkers to race. I’m not sure yet about next year.”

HS Winchester seized the early lead for Wilder and had just enough to edge Battin A Thousand by a nose in 1:58, a lifetime mark. Momoni De Vie rallied for third. Bill Daughtery, Jr. conditions the Cantab Hall-Easy Money gelding for Susan Daugherty.

“Mike described that trip as like a ride at Kennywood (amusement park) — a little bumpy in the turns. He’s been having trouble running in, so that’s probably it for this year. I gave $9,000 for him — it’s not like me to go that high,” said Bill Daugherty, poking fun at his well-known frugality at yearling auctions.

Heytherwillie threaded the needle late for Merriman to pull off the upset in 1:57.1, matching his life mark. Bar Coins rallied for second, beaten 1/2 length, with the first-over Bigly third.

“I know this little horse has a big heart, and the driver was amazing, but I didn’t know if he would make it,” said Kaylee Martn, who trains the Possess The Will-Heytheregeorgiegirl gelding and owns with Jodi Martin and Fred Uber, Jr. “When he sees an opening, he takes it. We’ll turn him out for a little bit because he deserves it, but we’ll keep racing him this year.”

He was parked the opening panel, but Lou On The Beach still was much the best, scoring for Wilder, Altmeyer and owners Diamond Club Racing in a career-fastest 1:55.2. Watch U R Back was 2-1/4 lengths back in second, while Roman Nodus rallied for show. The win was facilitated by a slowish 29.1 third quarter, usually an action panel at The Meadows.

“I actually felt like I was getting to the half a little slower than I did,” Wilder said of the son of Sweet Lou-Rockn On The Beach. “As we headed up the backside, I started touching the brakes a little bit. You usually can’t get away with that, but I was real happy. He just skipped off from there.”

Heart Matters grabbed the early lead and widened it from there, drawing off to prevail by 7-1/2 lengths in 1:57.4 for Todd Schadel and his co-owners, Christine Schadel, Rick Beinhauer and Regina Beinhauer. The daughter of Explosive Matter-Ts Fast Forward now has banked $114,611.

“When I got away with a cheap half, I felt pretty good,” Todd Schadel said. “We’ll give her a little break and probably come back with her this winter, maybe at Yonkers.” 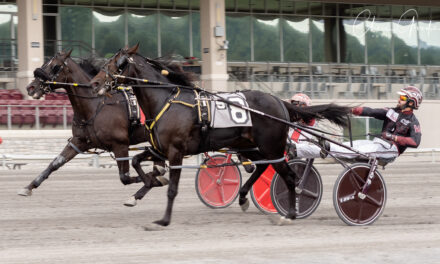 Time to apply for MSOA Scholarships