As Seely Promised: Racing Her Heart Out 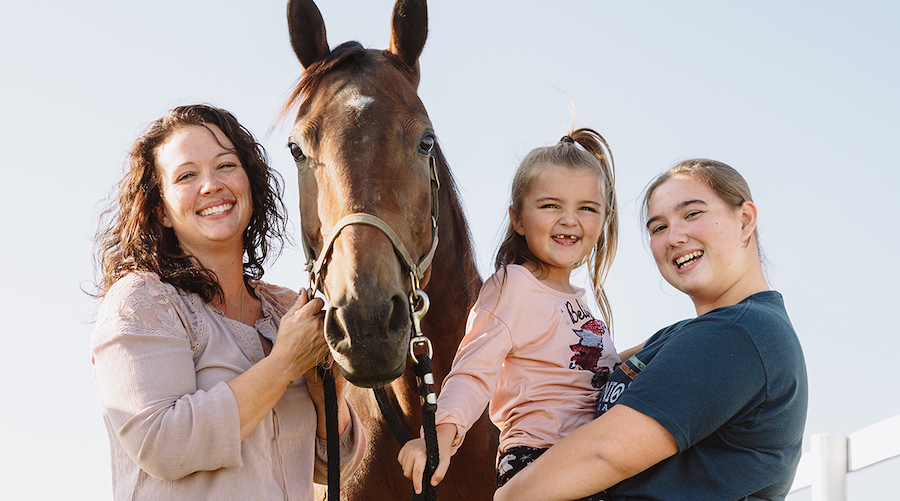 When As Seely Promised races Tuesday (September 29) at The Meadows, she’ll be vying for more than the $5,400 purse. She’ll also be carrying the hopes of her 6-year-old owner, Lucy Langley, who inherited the 12-year-old mare in the most tragic way.

Although not well known to the general public, Barry Langley was a popular figure within the harness racing community, which was shocked by his death in 2019 from a previously undiagnosed heart condition. Langley lived in Ohio, yet a race to honor his memory was held in California, testament to his standing in the harness fraternity.

But Langley was in his 30s and hadn’t made provisions for As Seely Promised, his only horse. After a number of councils, the family determined that the horse would be transferred to Lucy. That meant Lucy’s mom, Jessica Delval, a groom for trainer Doug Snyder, would take care of As Seely Promised.

The daughter of As Promised-Seeley Bert has been serviceable and durable, with earnings of $230,699 in 250 career starts and a mark of 1:52.4. But she also has significant physical issues, as Delval notes:

“If you look at her, you say, this is your horse? This is it? Her conformation’s poor, her feet are terrible. Since I’ve had her, she’s probably blown 10 abscesses. She has a knee that’s bigger than my head. The thing is, her heart’s bigger than that. She has a heart as big as a 50-gallon drum. Week after week, she shows up for us. She gave us a distraction while we were grieving Barry; we had that to look forward to.”

Snyder, the mare’s trainer, says it’s never certain that ‘Seely’ will be sound enough to compete.

“It’s week to week whether she can even make it back to the races,” he says, “ but Jessica works incredibly hard on her.”

All that hard work has paid off, as ‘Seely’ this year has earned nearly $24,000, a boon to Delval, who is a single mom with a 14-year-old daughter, Annabelle Delval, in addition to young Lucy.

It’s not only ‘Seely’s’ physical woes that worry Delval. With each race comes the prospect that the mare will be claimed from the $8,000 ranks where she competes. Delval would like to protect her by moving her to conditioned races or higher level claimers, but ‘Seely” has shown that she can’t earn enough money there, and Delval can’t afford a thousand-pound pet who isn’t paying her way.

“I am nervous about that,” Delval says. “I feel like enough people know the story — Barry was almost like a celebrity in the harness racing world — that they wouldn’t claim her. But there’s always somebody that’s out of the mix and doesn’t know, and there’s the potential someone could claim her. If that happens, I’ll be a train wreck. The kids would not totally get it, but I understand what that horse has done for Lucy and for us as a family, both monetarily and emotionally. So I would take it hardest of anyone.”

For all that, Delval is certain that her family is getting the kind of help not available at your local tack shop.

“I believe that Barry, in spirit form, is providing some magic,” she says. “No one in the world could convince me otherwise. Between the love that we put into her and Barry’s helping on the other side, I think we’ll be okay.

“I have the paperwork ready to file for my trainer’s license. Before it’s all said and done, I want to race her as her trainer at least one time. I feel compelled to finish Barry’s work.”