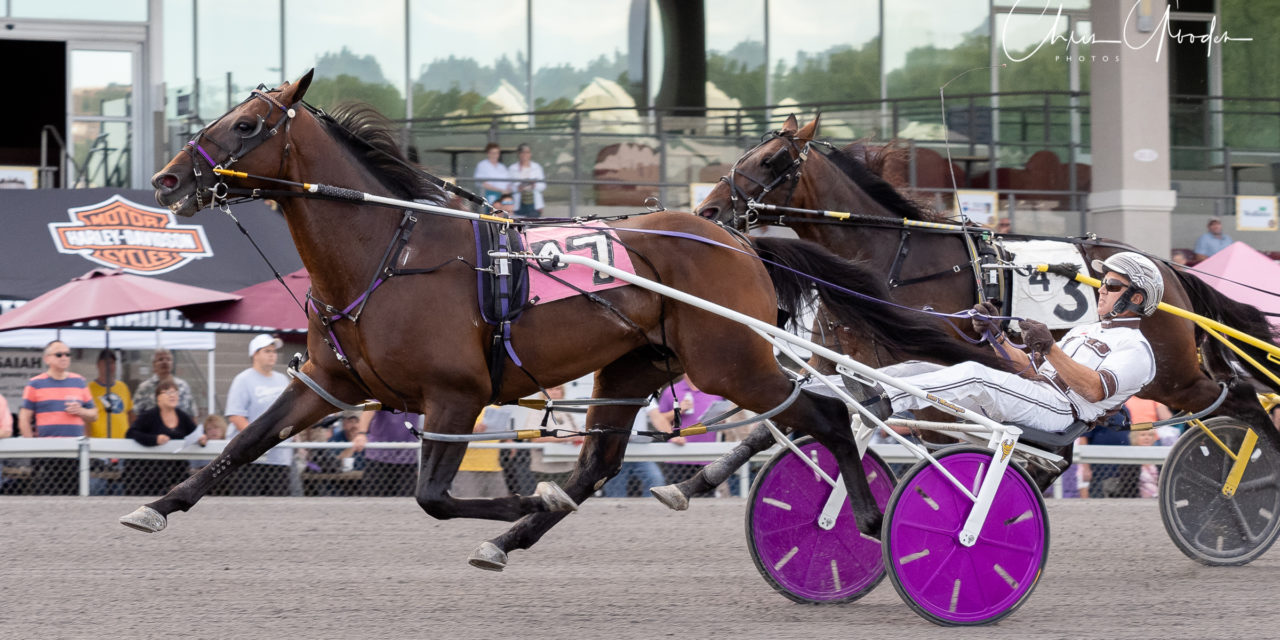 Southwind Ozzi, who won the 2019 Delvin Miller Adios Pace for the Orchids with the second-fastest time in the race’s 53-year history, Friday made a triumphal return to The Meadows, easily capturing a Pennsylvania Sires Stake split with another sub-1:50 effort. Crimson And Chrome sprang a 21-1 upset in the other division of the $170,058 event, known as the Tarport Effrat, for 3-year-old colt and gelding pacers.

Southwind Ozzi had raced only once since that 1:48 victory in the Adios, enduring a parked-out journey in the Carl Milstein at Northfield. On Friday, the son of Somebeachsomewhere-Southwind Solara took matters into his own hands, powering to the front for Brian Sears and never letting the pocket-sitting Captain Victorious get close. He downed that rival by a length in 1:49.1, with Semi Tough third.

“ He was a little warm after the Adios, so we put earplugs in for Northfield,” Sears said of the winner, who is trained by Bill MacKenzie for Vincent Ali, Jr. and Alma Iafelice and now boasts $388,764 in career earnings. “But he was a little green with the earplugs, so we decided to go without them tonight. He was really relaxed tonight. He’s a big horse, and he likes a big track.”

Crimson And Chrome hadn’t performed in a stake, much less captured one, in his seven most recent starts. But he pounced on a hot pace, brushed widest of all through the lane and scored in a career-best 1:50.3 for Tim Tetrick. Highlandbeachlover rallied for second, 3-3/4 lengths back, while Prince Of Tides completed the ticket.

“I knew we could win if the race had any pace, and they definitely put the numbers up,” Tetrick said. “My horse has been charging hard; he’s been waiting for this race. It feels good. I bred him, I own him and it’s been cool to see him grow up.”

“He acts like he’s one of those horses that doesn’t really get tired,” Callahan said of the homebred Western Ideal-Power Pack Hanover gelding. “He’s been going big back halves, but he’s been too far away to catch them. Today, he was close enough.”

In the other division, Under Paid secured a good early seat from post 7, then poured through the Lightning Lane to pull off the 21-1 upset. The 1-5 favorite Captain Malicious was second, beaten a neck, with Captainfabulous third.

“I kind of played it by how he felt,” said winning driver Matt Kakaley. “We were four wide into the turn, but he felt good, so I figured I’d race him. He exploded late. He had a lot left.”